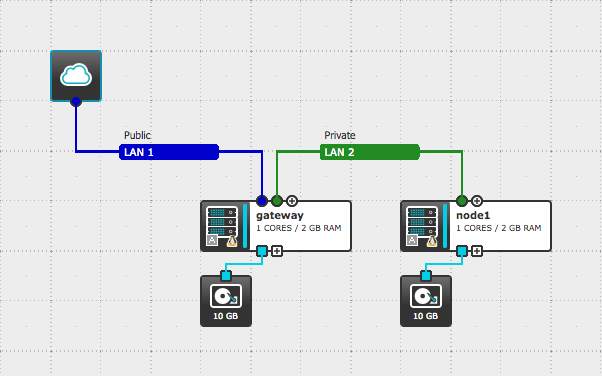 Edit the /etc/network/interfaces file. No changes to eth0 should be necessary unless a static IP address is required. Here are the default settings.

The secondary network interface will need to be assigned a private static IP address. Within the same interfaces file, modify the section for eth1 or create a new section if not present.

The interface will need to be taken offline and brought online for the changes to take affect.

The network settings will need to be applied (or the server rebooted).

The next step is to enable IPv4 packet forwarding. Edit the /etc/ufw/sysctl.conf file and uncomment the IPv4 ip_forward line.

The same can be done if forwarding is necessary for IPv6 traffic.

Enable the firewall forward policy by changing the DEFAULT_FOWARD_POLICY value in /etc/default/ufw.

IP masquerading must now be enabled. Edit /etc/ufw/before.rules and add the following NAT rules at the beginning of the file. These lines should be placed before any other rules in the file and after any initial comments.

If the firewall has not yet been enabled, then add a rule for incoming SSH access and start the firewall.